quad core nice, better than duo core which i feel is dated in this day and age (amd ryzen proved that point to intel detriment)

i wonder though if there will ever be an amd ryzen alternative that competes directly with these intel celerons for the qnap nas models. that would be interesting to see.
https://www.pcmag.com/picks/the-best-cpus
https://www.cpu-monkey.com/en/compare_c ... j4125-1076


2.5gbe is also a nice addition. perhaps this is going to be the new norm? at least on the qnap this began with the TVS-x872N series? but then you would need a switch that also supported beyond 1gbe though?

in the video they did point about motherboards AND switches that began coming out with 2.5gbe or more. Nice that they pointed this out :}

Interesting switches, so qnap has put some though in providing the NECESSARY switches for make best use of the 2.5gbe QNAP NAS'

this one in particular

because it's not managed and it's not a 10gbe switch, i'm hoping that the price would be acceptable for budget builders. will have to wait and see.

and they also got these qna adapters that can make these multi gig work over usb 3.2 in case your old qnap model does not have this 2.5gbe/5gbe etc on it. I am assuming this would work on a pc as well would it?

cause my desktop is rather old (intel ivy bridge).

the led and icon markings seem to be spot on.

from my own usage i've had to plug in a keyboard, mouse, and a flash drive. and i can imagine that 4th usb port being used for an external usb storage device. so 4 usb ports, should be alright for most

It doesn't sound like it natively supports m.2 ssds by default? (not sure on this, but i did not see this mentioned in the specs) but it can ADD support for it via the qm2 addon cards if later you decide you need 10gbe, or perhaps more m.2 ssd NVME slots.

ram slots says 2 slots (8gb) is that 8gbe per slot, or 8gb maximum in total supported?

TR-004 as a possible backup solution. Especially if you put in 4 hdds, it can do raid5. the alternative they mentioned also was a TL jbod series that uses a SFF-8088 multi sata interface ?

But if your backup can fit on 1 hdd, then you could just go for a external usb storage device with the capacity needed.

Could someone validate how many USB 3.2 ports have the model TS-453D???

in the video it showed 4 usb ports afaik

Have a look this detail of the back usb ports
One of the USB3 ports has a 2.0 note on top
You do not have the required permissions to view the files attached to this post.
Top

But, it seems there are no higher definition pictures on the Internet for now.

Follow-up: tried tweaking the original image via my iPhone.

I'm still not certain, but I'm leaning toward it being 3.0: 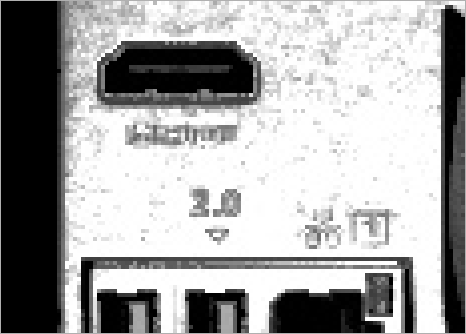 I just remembered to check for images again.

It looks like Rob @ NAS Compares has taken some new photos: 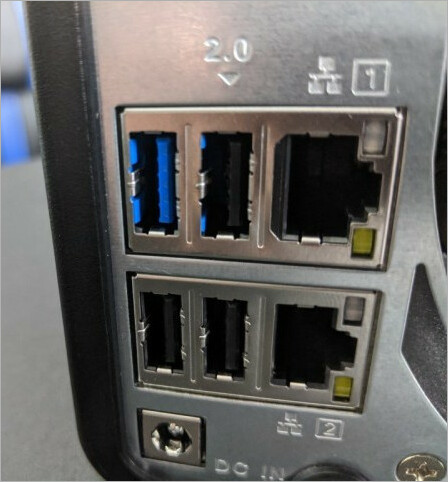 The center is black - not blue, like in the earlier photo. Maybe QNAP are shipping some units with a blue center, so they're marking them as 2.0 so people don't think it's a 3.x ?

that coloring of the USB socket is more pirate code ... no guidelines than law

Some of the DELL PC's I see, have black USB ports, but are USB 3.1 for sure (connector count on plug)
Top

So, the user gets an unexpected "upgrade". No bad thing.

That's better than expecting 3.x visually but only getting 2.0 speed.

My TS-653D-8G latest FW unit seem to run VERY hot as the fan speeds are not ramping in line with HDD temperatures. On a chilly winter night in Melbourne AU my Seagate Ironwolf 6TB drives were hitting 41c and the fan even when set on performance mode did not go above 800 rpm. The system was over 35c and CPU 56c.

Manually setting even 50% fan speed gives twice this performance and temperatures drop, and my 10 year old TS-659 keeps drives cooler and the fan ramps up much more intelligently. Switching from quiet/normal/performance mode did not seem to modify fan RPM behaviour in the face of hot HDD on a winters night. Running high RPM all the time is not ideal for longevity, nor is manually adjusting this day by day depending on ambient temperature.

There are fan test scripts in the FW file system so I suspect this has been a point of issue for the devs. Can only imagine the issues people will face in Summer months with this FW fan setup and and drives combusting. I hope QNAP can sort this out and ramp the fan more intelligently in a future FW update, I did raise a ticket but not sure it was taken particularly seriously given the potentially destructive nature of the issue.

So the TLDR: I would steer clear of these units until there is confirmation they have fixed the fan speed in line with temperatures lest you risk blowing out a HDD or two.
Top

.
Hope QNAP would include lots of usb3 of the next release of this family.
Top

Steer clear of this unit, during cold days here in Australia the HDDs run way too hot and the fan speed is not adjusted well at all, but even at 100% the enclosure seems to have massive cooling challenges. I expect my drives to reach 50c+ in the heat of Summer. My previous 10 year old QNAP runs much cooler.
Top
Post Reply
14 posts • Page 1 of 1